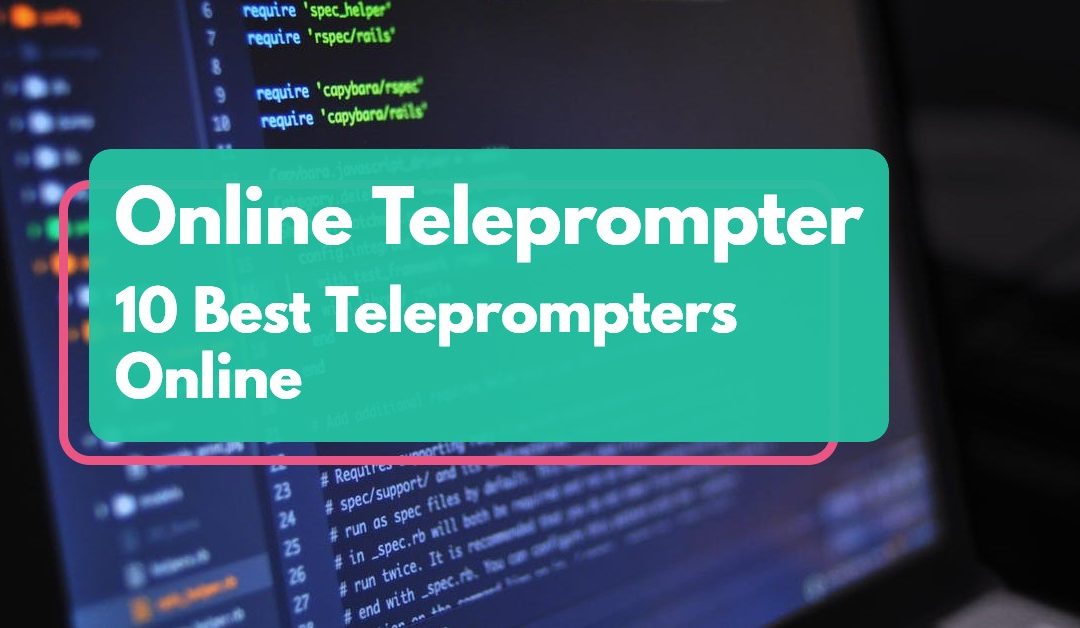 Have you ever noticed that newscasters and politicians speak fluently without even looking at a paper? Perhaps you might think that you can never speak like that in front of thousands of people. However, the big secret is the Teleprompter.

This is why they speak in front of a huge audience without breaking a sweat. Here we are going to talk all about online teleprompters. You might want to stick around because it’s going to be interesting.

What is a Teleprompter?

Teleprompters go by different names such as an autocue, cue, and prompter.

Simply, a Teleprompter is a display where you can see a speech or a text. This way the newscaster or basically the speaker in front of a camera or an audience wouldn’t have to rely on a piece of paper or their memory.

So, when the screen displays the electronic visual speech or text, the person in front of it can speak simultaneously when the text scrolls up. You can also compare this to a cue card. The only difference is teleprompters are more legible and reliable.

The main purpose of the teleprompter is to provide confidence to anyone who wishes to speak in front of an audience.

The history of Teleprompters

Here are some fun aspects of the Teleprompter for those history junkies.

TelePrompTer is a corporation that was formed by 3 people. (Fred Barton, Jr., Hubert Schlafly, and Irving Berlin Kahn)

It was founded in the 1950s. Fred Barton, one of the inventors of the teleprompter firstly suggested the idea of the teleprompter, because he was an actor, and he had a clear idea of television performers’ struggles to memorize long materials in a short time.

Subsequently, the first-ever teleprompter was built in 1950 by Hubert Schlafly. The device was operated by a technician hidden near the camera. There was a special electric typewriter to print the script on a paper scroll. The letters were 1 inch (2.54 cm) high.

This teleprompter concept got so popular that even famous figures started using them.

Herbert Hoover who was the president in the U.S.A. from 1929 to 1933 had used a speech teleprompter that was designed by Hubert Schlafly. He used the device for his speech in the 1952 Chicago Republican National Convention.

These mechanical prompters were that famous even in 1992, they were still used in television. A fine example of this is The Tonight Show Starring Johnny Carson.

In 1982, The first personal computer-based teleprompter was invented that was named Compu=Prompt. This teleprompter included specially-redesigned camera hardware and custom software. The software and hardware were run on the Atari 800 Personal Computer with smooth hardware-assisted scrolling.

Years later, in 2010 for “Pioneering Development in Electronic Prompting” Compu=Prompt was awarded the Technology and Engineering Emmy Award.

Teleprompters have made their way into the present and are better versions coming being produced all the time.

Now, with the rapid growth of technology, we have Online Teleprompters which is amazing.

What is Online Teleprompter?

An Online Teleprompter is no different from a typical Teleprompter. The only significant difference is you don’t need a physical teleprompter to begin your speech.

What are the benefits of an Online Teleprompter?

Generally speaking, a Teleprompter is absolutely beneficial for speakers who have a lot of materials to memorize for just one video or a public speech. The speaker can be relaxed and focused on delivering the message with necessary gestures and expressions rather than being fixated on the script. There is no pressure on forgetting your script. You just have to focus on realistically conveying the message.

The other advantage is, a Teleprompter largely supports the speakers who are camera shy. Sometimes no matter how fluently and confidently you speak in front of your family and friends, you might get suddenly shy in front of a camera. Sometimes you stumble through your words. The worst-case scenario is you going completely blank.

Sometimes improvisations go completely wrong. You say something totally opposite or inappropriate before your audience. These mishaps don’t occur unless you are doing a live video. So a teleprompter is mandatory if you are a newbie speaker.

If this resonates with you, a Teleprompter is your best shot.

If you are in a hurry you can take your laptop or tablet to search for an Online Teleprompter and start your speech. You don’t need to change devices or think about having pre-downloaded teleprompter apps. For instance, it’s just like how we use Google Docs. We don’t have to be limited to a device that has Word to write a document.

If you want to be professional then a Teleprompter should be your best friend. You don’t want to seem unprepared for your speech, do you?

Or, Say you are going to do a presentation for one of your projects and you need to read a lot of text. You don’t need to carry a piece of paper that will show your anxiety. Instead, you can take your laptop or tablet, set it in front of you, and start your speech. This way you don’t have to look down every time to deliver your speech.

Online Teleprompters are saving a huge amount of money. A Standard Teleprompter with decent hardware will cost you a lot.

On top of that, you need physical space for it. Unless you are a professional YouTuber or a video maker, this will be an unnecessary investment. You can simulate the same process with your laptop or your tablet without even paying a single dime.

How to use Online Teleprompters?

As we have discussed earlier, there are many Online Teleprompters.

The first and foremost step is opening up your browser and search for an Online Teleprompter. Now you might see several options.

For instance, let’s take a look at Teleprompt.online. It is a web app that can be used in any browser to prompt texts. This app can be used in any modern web browser without a hassle. You can use this Online Teleprompter to simply prompt your text for a video, speech, or a play with your own device.

The minute you land on their web page there is a small window where you can type your text or simply just copy-paste from your existing document. Once you put all of your text there, you can hit the prompt button.

Then you are immediately taken to the prompt screen. The screen background is black. There is a horizontal line that is grey in color. When the text scrolls up, you need a point to place your eyes. This way you can look at the middle line where the text is going up and you can keep up with the text without missing it.

With this Online Teleprompter, you will see there is an option to change the speed and duration of the text that will be scrolling up as you speak. This way you have total control over your speech. You don’t have to panic and think that you have to keep up with the Teleprompter.

The other handy feature of this Online Teleprompter is that you can easily Pause, Stop and Play the prompter whenever you like. Imagine you are at a presentation. You have some images or videos to show. At that moment you can pause the teleprompter and pick up exactly where you have left off. The timer will also be paused so there is no confusion whatsoever.

Say, you have your laptop placed on a desk in front of you. Think of the horror if you can’t see the text that is scrolling up. Don’t worry. You don’t need to squint your eyes and pray you will get the words right. You can easily change the text size if there is a lot of distance between your screen and you.

The fun part is, this Online Teleprompter is a responsive web application which means you don’t have to be limited to your laptop. You can use your tablet or your mobile phone as well. You don’t need to install anything either.

All you have to do is put the text, sit back, and relax. And of course, start talking.

How to choose a Teleprompter app?

If you suspect something might go wrong at the last minute and think it’s better to have a backup rather than relying on an online app, you can download a Teleprompter application to your device.

Just like an online Teleprompter you can open the app and start to prompt.

However, before you choose your Teleprompter app, consider the above mentioned basic features in the app. If the app doesn’t have these basic features then it’s a waste of your time.

Consider if the app you choose has Mirror text that prevents the text to appear upside down.

For additional features, you can look if it has options to save the text, Import text, Cable remote control, Remote Control by wifi-Bluetooth, Audio Remote Control, or Record video.

If you are a tech buff, and you would like something you can feel and touch, then head on over to Amazon.

Who can use Online Teleprompters?

The short answer is everybody.

Whether you are a student, an employer, employee, or an entrepreneur you can use an Online Teleprompter and feel confident any time you have to make a speech.

Imagine you are a YouTuber and you have to memorize a lot of material in a short period and you just don’t have the time for it. A Teleprompter can help you look more professional, prepared, and confident.

The bottom line is, if you are a person who often goes in front of a camera to speak, then an Online Teleprompter is the best choice for you.

Getting used to a Teleprompter

Yes, using a Teleprompter of any kind is saving you a lot of trouble. You don’t have to memorize a script and you don’t have to worry about what you might say. However, you can’t just get up in front of the prompter and start talking.

Especially when it comes to Online Teleprompters, you should practice a bit before you turn on your camera. Think about how you would talk to your friend or your employer. You should avoid monotony when you speak. In other words, you can add various pitches in your speech when necessary. If your speaking pattern is flat, it will be robotic and the audience will realize you have a script in front of you. Take pauses, speak louder, and smile from time to time.

Make sure to pay attention to your body language. The speech should be fluid and natural. If you move your head, hands, and eyes the audience gets a message that this person is not reading from a script.

Remind yourself to take your gaze away from the screen from time to time. When you practice this method often you can easily do it in any speech. When you focus your eyes continuously on the screen, your eyes will draw a horizontal line with the text. This will make your speech rigid.

When you incorporate your speech with all the above gestures, the audience will not notice that your eyeballs are going in the same direction over and over again.

Online Teleprompters are so beneficial when you are trying to save a bit of money. If you are in a hurry, an online teleprompter can actually save your day.

You don’t have to borrow someone’s device that is already installed with a teleprompter app. You can grab your device and use an Online Teleprompter.

It is easy, reliable, and efficient. Go ahead and try one yourself, so you can witness how handy they are.